Hello, friends! In case you’re not up with the news (and also not from the Midwest United States), it’s currently about -20 degrees Fahrenheit outside, a temperature which is also known as fuck cold. It’s so cold that even the state universities have closed for the day, and plain old subzero temperatures aren’t enough to make that happen. So I’ve been inside all of today under a very cozy blanket so I don’t freeze. I haven’t gotten a whole lot done today–it’s just one of those tired days, I suppose.

Anyways, in case you missed it, this past weekend, January 25-27, was the Global Game Jam. My good couch friend, who’s working with me on some other projects, invited me to come along, and so I did! I ended up doing basically all of the art in the game (and nothing else), and all in all, it turned out really well. We (a team of five people: three coders, me, and a guy who did basically everything else) really made a whole-ass game in less that 48 hours, with game mechanics and even a cutscene that took like 14 people-hours to finish. If you’re interested, you can download it here: https://globalgamejam.org/2019/games/spectre-protector

While I’m here, I’ll go ahead and talk about the process and how it went.

So while Game Jam started on Friday night (25th), I wasn’t actually on site at that time on account of being violently ill with stomach flu. Technically, I wasn’t really violently ill that day, because the worst of it was on Wednesday and Thursday, but it was definitely a bit dicey for me to go out and stay overnight at that point. That night I did some conferencing over Discord with the team to brainstorm what sort of game we wanted to make. The theme was “What home means to you”, so we threw around some ideas. Stuff like adventure games, or a house building (and fighting) simulator, or moving house sort of puzzle game, but we ended up settling on the idea of a ghost haunting a house to defend the family living inside. (I would mention that the original idea of having a ghost in a house, very unsurprisingly if you’ve ever read any number of my works, was mine.)

We did a little bit of brainstorming online on Friday night, but mostly I played Redout and went to sleep way too late and had stress dreams about making a game about murder, which is an unrelated thing I’ll talk about at a later date. Saturday morning, I got up early and went downtown to the site. When I got there, the other guys were working on code and level designs. I got settled in and started figuring out graphics.

I mentioned it earlier, but it’s worth mentioning a second time that I was basically the only artist on this project. One of the other guys did a couple of object sprites, but I was going to handle all of the animations and most of the art. On account of my being the main artist, I’d decided way ahead of time that we were going to make something with pixel art because pixels are generally more forgiving, and because it’s something I can feasibly do with a mouse and Bamboo instead of my usual tablet, which is a Cintiq (which, if you’re not aware, is a tablet monitor so you can draw directly on the screen).

I’m not going to go on a huge spiel about why pixel art is great. There’s a solid percentage of indie games out there that use pixel art right now, so you can look up any number of examples to see that pixel art, when done right, looks great. The main reason I like pixel art is that it’s got a level of precision that makes it easier to do things like animations or art without having to worry about wobble, get a unified aesthetic, and make tilesets. It’s a lot easier to make clean art with pixels, which makes it good for something with a restricted time frame, especially when you consider that I usually need two sketches to do a piece of art.

And of course, pixel art works. I’ve got a whole thing about how I miss sprite-based games because it’s so hard to make things in 3D that are beautiful in the way that pixel art like stuff from Kirby or Pokemon Mystery Dungeon were that I won’t go into right now because that’s off-topic, but suffice to say, pixels are great.

Anyways, I got to the site at around 8 in the morning, picked out a color palette off of Lospec (16 colors to keep things simple) and worked on tilesets (16px to make things simple) for about four hours. There’s not much exciting to say about that. I made floors and walls so they could tile together and be used to build levels. They weren’t pretty, but they weren’t ugly either, and they worked. 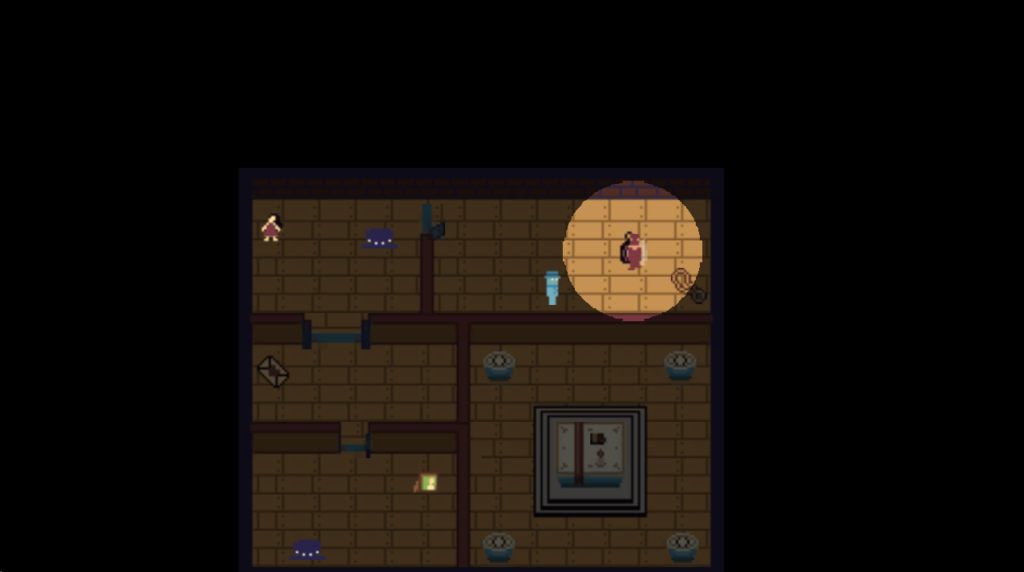 Our game’s protagonist was a ghost and I originally wanted to make it more like one of the PAC-MAN ghosts except with a hat, but it turns out that when you make sprites that are 16px, you have a lot of limitations. When I tried to actually draw a ghost, it looked super awful, so I ended up making it a dude instead. He still has a hat but now he has a tie so people can actually see where the head connects to the neck.

It was around this point in time that I decided pretty much all the art in this game would be silhouettes because that’s about as good as you can get when you’ve got 16px and 16 colors. That’s how our main enemies ended up being squishy slime boys. It turns out that moving masses is much easier than worrying about discrete movements of things like limbs, and with the restricted color palette, I was determined to keep all the enemies as weird shadow demons to make it clear that they’re, well, all enemies.

I’m not experienced with pixel art by any means, but it’s worth mentioning at this point that I have a pretty strong background in 2D animation. I animate exclusively stick figures, but when you animate stick figures you have to get really really good at the animation part of animation (versus the drawing part). So I have a very good handle on stuff like easing and squash and stretch, and those principles carry over to everything animated, including sprites.

It turns out that when you’re using silhouettes, it’s way easier to deal with squash and stretch and that goes a long way to making sprites look good even when your resolution is seriously limited. It helps that stuff like waving back and forth is a pretty imprecise animation so it’s okay if you’re plus or minus a few pixels here and there.

Animating all the sprites, including enemy death/inactive animations, NPC sprites, and a couple of effects (twenty-something sprites in total), took about twelve hours. It sounds like a lot when you say it like that, but it wasn’t actually that bad. When I was done at around 12 or 1 in the morning, I was still going pretty strong.

Once all the sprites were done, we had to worry a little bit more about the story, because obviously a game like this needs a rich and compelling story. I did not do the main writing for this game (I only did a couple of revisions to make it sound better at the end), but I did draw all of the stills used in our cutscene. Because yes! A game that’s made in less than 48 hours deserves a solid opening cutscene. Or at least, it does when there’s another twelve hours left and the artist’s finished animating everything that needs to be animated.

You can see the stuff I drew below (or by playing the game). Naturally, I used about as low of a resolution as I could handle, which ended up being about 160×90 and used the same limited 16-color palette as the one that’s used for sprites. It was an…interesting experience, trying to figure out what were the best colors to use and where. Honestly, I think I did a pretty good job.

I finished these somewhere around four thirty in the morning, which is around the time where I was starting to feel the sleep deprivation and had to lay down on the floor and listen to the Redout soundtrack for an hour and a half. After that, I woke up, ate breakfast, yelled at couch friend about his typography choices, and got some stuff figured out with the cutscene, then went to nap for a couple more hours. After that, I helped rewrite some of the cutscene, and that was basically the end of my contributions to this game.

After we submitted it, we got to do the ceremony where everyone presented their games–there were ten teams in total, though only nine of them presented. I don’t have a huge amount to say about other people’s games except that everyone really did have very different interpretations of the theme, and there was a huge amount of variety between what everyone made. Some of them were more impressive than others, with varying levels of polish and completeness. There were 2D and 3D games which is honestly really cool–I wouldn’t ever make 3D models on this timescale, not that I know how to 3D models on any timescale. Play to your strengths and all that. I was really surprised to learn that a) the other teams were almost all 8-11 people, which is way more than our 5, and b) we were pretty much the only ones who went for pixel art. I honestly thought more people would use pixel art.

I additionally feel obligated to mention that a lot of them used fuck tiny text for their game. If you ever make a game, please don’t do that.

We presented pretty well, I think. We were able to show off the cutscene and the gameplay, though not too much of it because our Try Again button was broken, which meant if we failed we had to restart the entire game (this bug is fixed in the currently uploaded version). I guess everyone else thought it was pretty cool, too, including the judges, because we got 2nd place which is honestly way better than I thought we’d do.

So all in all, what were my thoughts? It was a good experience. I had some flashbacks to RUSHED back on FluidAnims, where I participated in both RUSHED3 and RUSHED4 (more the latter than the former), those being 24 hour animating challenges. There’s a certain inner peace you get from working on one and only one project for an extended period of time because there’s a deadline hanging over your head like a guillotine. I’d definitely be willing to do this again, and I think we’re planning to do Ludum Dare in April, so we’ll see how that goes now that we actually have a vague idea of how to use Unity.

It definitely gives me a lot more confidence about being able to make the game that couch friend and I have in the works.

Tagged on art, on development