Well, it’s been like two years since the last time I posted, but here I am, still alive. Considering the whole pandemic thing, that’s worth saying. I’m still alive and good health. I could say it’s because of the pandemic that I haven’t posted, but it’s mostly that I’ve been busy with unrelated things.

I did Global Game Jam in 2020. We went to a different venue (back in the ancient pre-pandemic times when in-person meetups were still a thing) and we had a much bigger team than before, and it was kind of a mess. Just like our 2019 game we used a limited color palette and pixel art, and the idea of the game was that you were a robot who had just woken up in this old factory, and your friend, who is a giant robot crane thing with no legs, needs your help to get enough parts to fix the radio tower so you guys can call for help. You have to venture out into the wilderness to find old robots, scavenge parts from them to fix yourself and also your robot friend, and hopefully get help. The problem is that the more parts you scavenge, the further out you’ll have to go for the rest, and there’s a limited amount of resources available, and also you are personally slowly breaking down. The title is a play on these concepts–you’re rusting, you have to ration parts, and you’re restoring your radio tower and also yourself, as well as the implicit two options of “rust or ration” as you deplete parts.

As always, I did the art. We actually had a second artist on board for this one, who did the tilesets while I did character sprites and GUI. It’s a bit too much to post all the art I did for it (there’s a lot of little item sprites) but here’s some selected work: 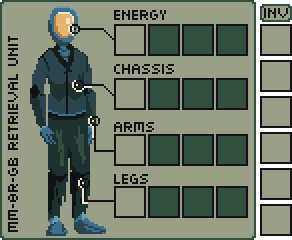 Opening cutscene with the friendroid.

The radio tower home base. 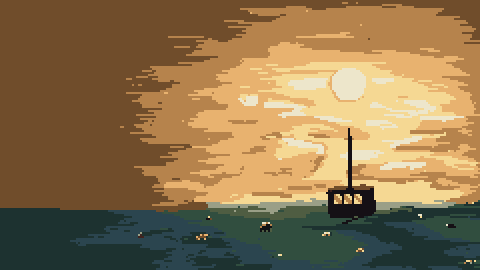 Here’s a link, though the game is literally unplayable.

I also did Global Game Jam in 2021! This one was virtual, though I still decided to sleep on the floor to get the real game jam experience.

2021’s game jam theme was “Lost and Found” so we ended up making a story where you control two robot friends who are lost, but find each other. It was a relatively simple split-screen puzzle platformer that had a) gravity switching mechanics, b) platform switching mechanics where you could press buttons to make obstacles of one color tangible while making all other color obstacles intangible, and c) box pushing. Can’t get enough of box pushing.

We decided to do game jam in Godot this year, just because using Unity was kind of a disaster last year, and because it was worth trying an engine that’s actually built for 2D instead of having to hack it together in a 3D environment.

Character animations were a little more complex this year with the 2D platformer, having idle, run, and jump animations, as well as exit level animations. The actual animation switching had some minor issues but that’s a problem for people who have more than 48 hours to make a game. 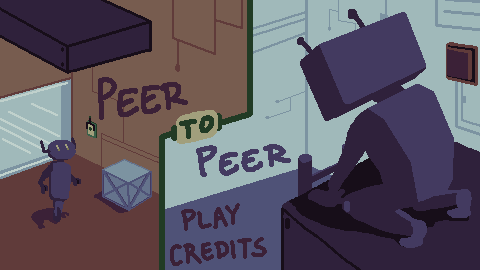 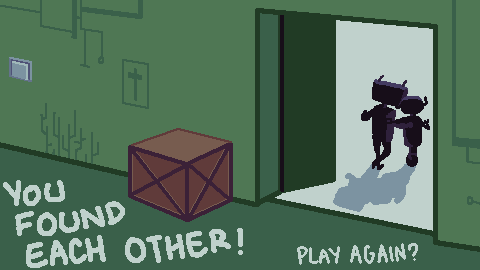 Here’s a link! There’s a few easy levels and one hard level!

We didn’t do Game Jam 2022 because of scheduling conflicts. Maybe next year!

I’ve been writing pretty actively (in the months when I’m not playing RuneScape Leagues or Minecraft), which you’re probably aware of already if you’re following my Tumblr or AO3–at this point, statistically speaking, if you’re visiting this website you’re probably coming from one of those two places. I’ve been writing so actively, in fact, that I’ve posted about 430k across 2020, 2021, and 2022. That’s a lot!

I won’t discuss that much about that since this isn’t really the place for it, but suffice to say I’ve put together a lot of stories I’m proud of. If you’re visiting my website because you read my other stuff and wanted to see what was going on here, welcome!

Roy Kaplan: Out of Sight

This one is really exciting–it’s a radio drama I started writing back in 2019 because I listened to Richard Diamond, Private Detective and was like “hey, why can’t I do that, too?”. I’ve written a couple of scripts on and off since then, but recently I was able to hook up with Tiny Lunar Dragon Studios who’s currently helping to produce some episodes for real!

What is Roy Kaplan? Glad you asked!

Roy Kaplan: Out of Sight is a radio detective drama taking place in the cyberpunk future featuring Roy Kaplan, the titular private investigator, burglar, and psychic. He’s a former career burglar and has telekinesis and the ability to talk to ghosts. He solves future crimes with a combination of breaking and entering, talking to the recently deceased, getting advice from his actual ghost from 1940 roommate, and good old-fashioned detective work. We’re working to put together a full season right now of 12 half-hour long episodes.

I’ll be voicing Roy, and we’re pulling in some voice actors around the community to fill the other roles. I’ve got a lot to talk about Roy Kaplan, so you’ll hear more about the show in the coming months, guaranteed. But in the meantime, you can check the Roy Kaplan page under my projects and see what’s going on!